Maybe it was a bit hasty when I announced in my Wednesday Yarn Along post that I would have a finished pattern for you to test knit on Sunday. I don’t have one. I knitted and reknitted the collar yesterday. And while I got quite a similar look to the picture of the cowl, the drape is so not how it is suppossed to be. Too stiff, standing up rather then softly falling… And because I was really annoyed by this I thought I might as well start knitting my second test version. 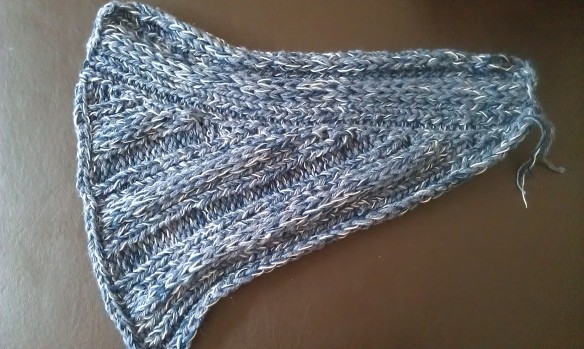 END_OF_DOCUMENT_TOKEN_TO_BE_REPLACED

I got further on my quest to reknit the Hunger Games Cowl. And many people are also looking. There is even a thread on ravelry for it now! After looking again at my scribble of the cowl parts from part 1 I thought: well why should I knit it in three parts? Part 1 and 2 could go together. And now look: Less sewing and doing that makes it so much easier to knit!

END_OF_DOCUMENT_TOKEN_TO_BE_REPLACED

I saw that Rachel was looking for a pattern for the cowl from the new Hunger Games Movie. Now first of all I was surprised to find out what “The Hunger Games” is all about. To be honest I always thought “The Hunger Games” was some kind of series about teenage girls trying to gain size zero and being anorexic. This was why whenever someone mentioned the books I thought: well I’m not going to read something like that. But yesterday I realized that it is the series that in German is called “Die Tribute von Panem”… So reading Rachels post made me not only realized how wrong I was, it made me buy the first volume of the Hunger Games and I saw that beautiful cowl Katniss is wearing in the new movie.

I liked the cowl so I thought I might as well go on a quest to design something looking like this cowl. The construction was quite clear to me from the beginning. I wanted to knit two triangular lower parts for front and back. Then I wanted to knit a third part to create the middle piece and then maybe crochet the top. So first of all I was going through patterns to find something similar to the ribbing on the lower part. I marked some patterns and then went through my stash. END_OF_DOCUMENT_TOKEN_TO_BE_REPLACED

This morning it was not as sunny as yesterday and I picked up a lace cardigan made from very nice and cool egyptian cotton I had knitted last year that had been lying around waiting for some modifications to be done. END_OF_DOCUMENT_TOKEN_TO_BE_REPLACED

I made these bags for Michael’s nieces and I wanted to show you how I did them. I think they should fit for kindergarden and primary school kids.

I refer to the models from left to right as B, C and A

Some months ago I wrote this pattern for a blog swap with Nathalie at Marigold’s Loft:

To make this pair of ankle high knit-felted slippers you need: 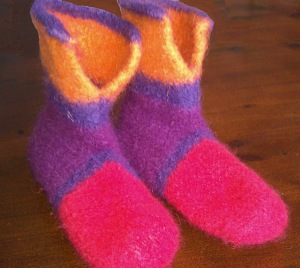 I made a cabled beanie for my brother and want to show you, how to do that cable pattern. The size is 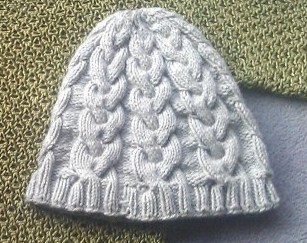 for an adult man. If you want to decrease size, the easiest way is to leave out a braid or two and start the decrease earlier.