In my autumn break in university in Australia I went to Perth. We spend a few days there over Easter and it was, to be honest, a bit boring as the city seemed totally deserted but one thing that stayed on my mind and that my trip to the Volksgarten reminded me of was our trip to the Kings Park. 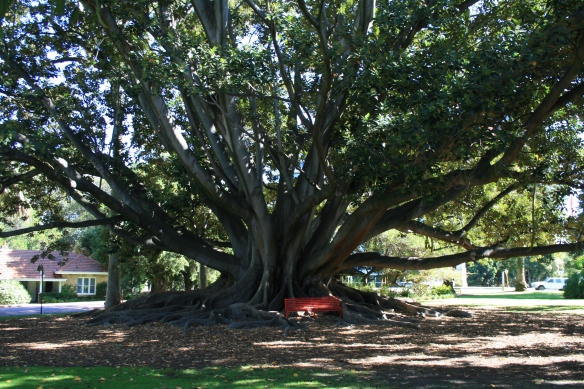 Kings Park and Botanic Garden is a remarkable area of unique bushland, tranquil parkland and botanic garden with a total area of 400.6 hectares. The cool thing about is that END_OF_DOCUMENT_TOKEN_TO_BE_REPLACED

Another easy one at the  May Photo Challenge: “Morning sky”. Well I can think only of one occasion when I got really early and took pictures: When we went to see Ayers Rock or Uluru as the Aboriginis call it and well, they have been there first. 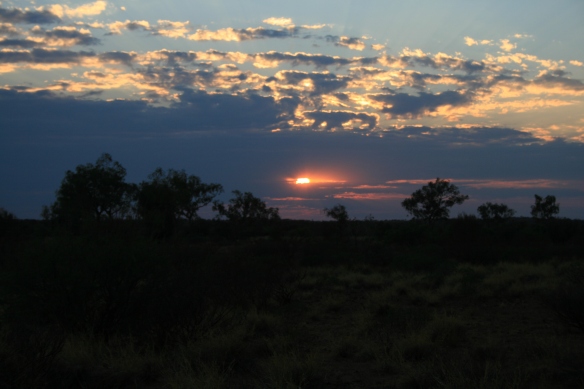 We got up around 4.30am to be at the site at around 5.30am to watch the sun go up over Uluru and walk around that big rock. It was an amazing sight and I had that “I could actually feel the power of this place if there weren’t that many people around” feeling.And with people I especially mean those stupid people who can respect other peoples faith and thought they hadn’t really been there without climbing it. Hey, the Aboriginis don’t want that and you wouldn’t climb an altar to take a foto on it either, wouldn’t you? 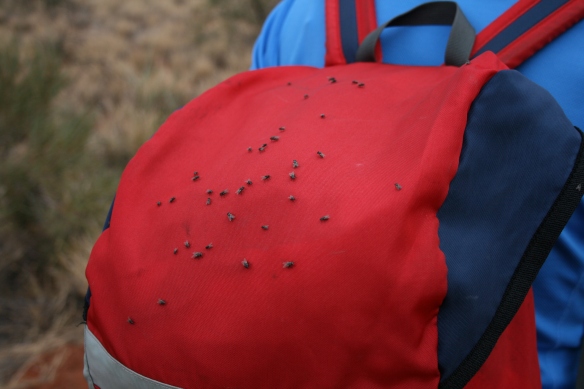 It was late September so early spring but the temperature was rising quickly (I don’t want to know how hot it can get in summer. I think spring or autumn are far more recommendable) and a pest of flies was bother all of us except for the ones that had bought a flies protection hat which looked absolutely stupid but you tend to ignore stupid and long for one when flies are all over your face, in your ears, nose and mounth. How can you get used to this? 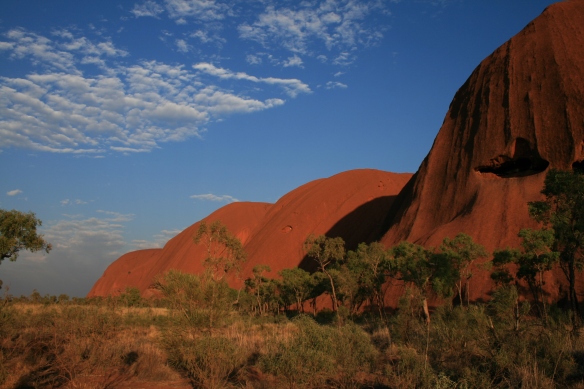 We went there with Adventure Tours and were quite happy with the trip. It was a no frills trip with a mostly younger backpacker crowd. My mum was by far the oldest in the group but she was absolutely relaxed about this. 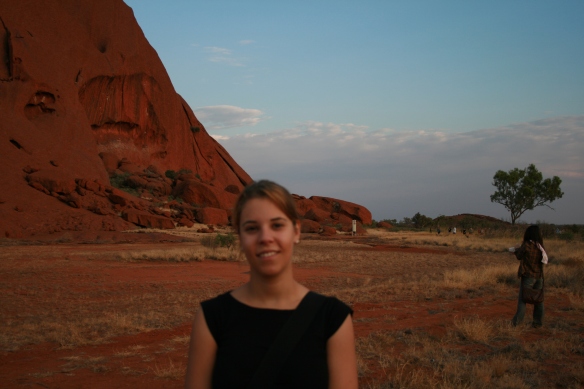 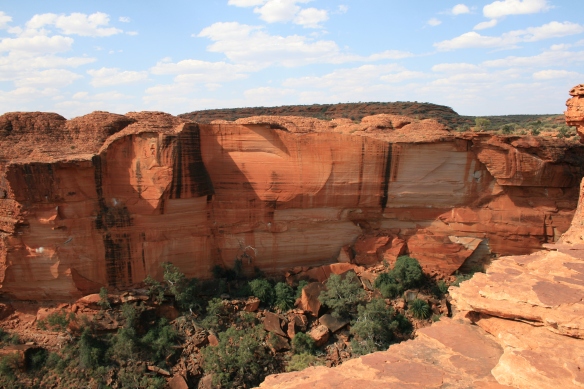 The trip was great. Especially our wallk around Kings Canyon, a three hours trip that nobody was allowed to start on with out an 1,5l bottle of water as it was really hot. 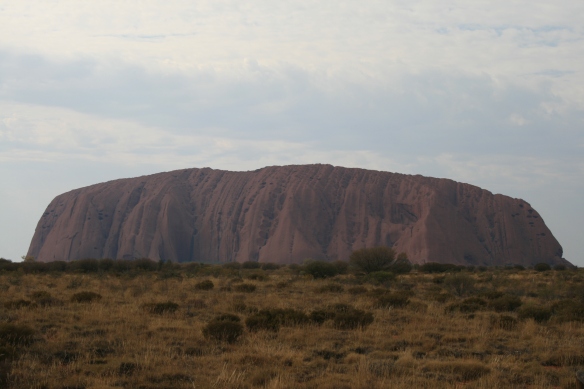 And what we saw was breathtaking. All that red earth, these rocks that are simply there in the middle of nowhere, all that is just stunningly beautiful. If you have a chance to go there, do it! But take the time to travelling from Alice Springs as Kings Canyon is really worth a visit.

Now today’s May Photo  Challenge topic “Leaves” is easy to master. Or rather too easy so that I can’t decide which one to take. I’m just showing you my favourites: 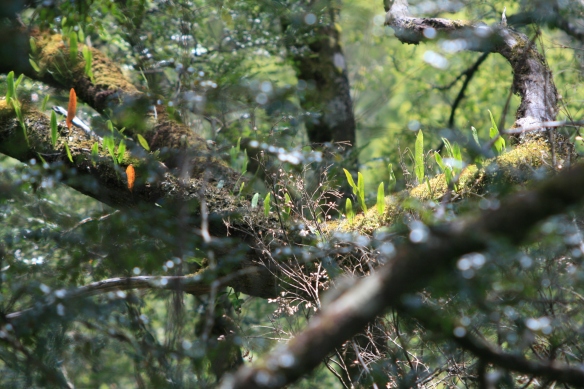 This is in Australia, on the Great Ocean Road in a Tree Top Walk Place. My dad took that lovely picture and it now covers the freestanding back wall of our stove. 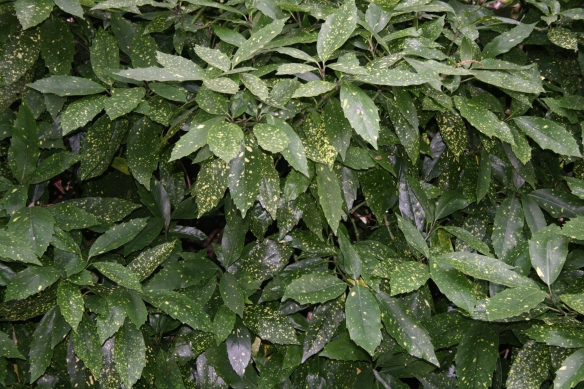 And this is in the palace gardens in Sintra, Portugal.

Well that is a difficult topic today at the  May Photo Challenge “Happiness”. Before I could choose a picture I had to define for myself what is happiness? According to Wolfram Alpha “Happiness is a mental or emotional state of well-being characterized by positive or pleasant emotions ranging from contentment to intense joy.” Ok, I could have come up with that. It is that content little smile when everything is just right, that giggles you just can’t stop, a short moment or a general state of mind. Am I happy? Yes I am. Not in the “everything is pink and sparkly and we all love each other every single second of the day”-way but in a good healthy way that feels like “sure, things could be better but I’m actually quite fine the way things are” contentment. Now how do I translate that into a picture left alone do I have a picture that shows just that? It was hard. I checked pictures from the last 10 years. And the picture that shows happiness the best for me is this one. Nothing special, just a night when everyone was happy.

It was in Oktober 2007 in the Macquarie University Village in Sydney where we had an outdoor dinner with about 20 people where everyone brought food from their respective country. We just had a good time, eating and drinking. I still miss these times and all the people sometimes. I just met very few of them again (yet).

Here it is: part 10. I’m a bit proud of myself for blogging ten days in a row. And I want to finish my 10-Days-Special on Australia with a wrap up on Sydney as there is so much to do. There is definitively more to do than what I list, but let’s say you have four days in Sydney and the weather is nice, what should you do? Here are my favourite: END_OF_DOCUMENT_TOKEN_TO_BE_REPLACED 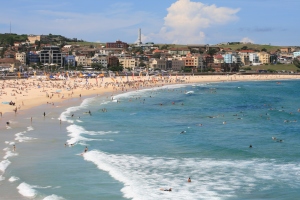 So, there are only two more posts left in the 10-Days-Special on Australia and this is the first of them: I want to tell you about the beauty of Sydney’s beaches and walks: the Coastal Walk from Bondi to Coogee Beach in Southern Sydney.

The walk starts at Bondi Beach. Now many people name it the beach to go when in Sydney. It’s a surfer’s beach, END_OF_DOCUMENT_TOKEN_TO_BE_REPLACED 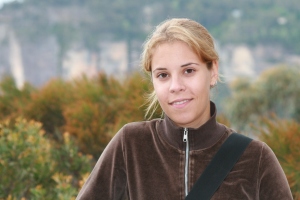 Part 8 of the 10-Days-Special on Australia is on the Blue Mountains, a mountainous region in New South Wales, Australia. It borders on Sydney’s metropolitan area, its foothills starting approximately 50 kilometres from the city, easily reached by train which makes it a great day trip from Sydney.

After about an hour ride, you’ll reach Katoomba, END_OF_DOCUMENT_TOKEN_TO_BE_REPLACED

My Tweets
Travelling the world… and much more
Create a free website or blog at WordPress.com.