Last week we were on holidays so I didn’t participate in the Yarn along but this week I’m back and happy join Ginny and the knitting crowd again. So what happend in the last weeks? First of all no holiday knitting. When I go on holidays with Michael I don’t take my knitting with me. First of all I find it a bit weird (and warm) to knit on a summer holiday and then I think Michael deserves a break from seeing me knitting too… And it gets me back in the spirit of knitting. So I was very productive once  was back home. 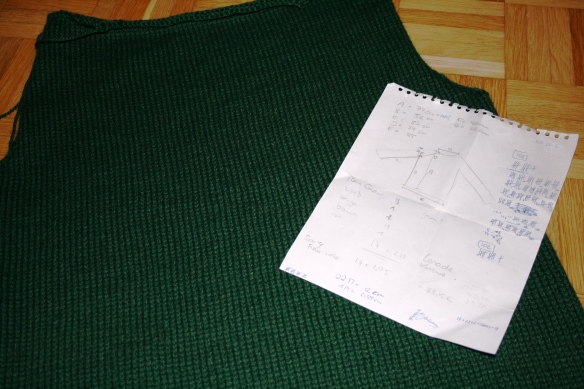 I finished the back of the Christmas sweater for my brother and blocked it already to check that it has the correct size. I had written down the measurements of one of his sweaters to have something to compare my project with as I probably won’t see him until I’ll mail him that thing. And even though it is just the end of August I start to get nervous I won’t be able to complete it in time. Ok, this is a bit paranoid but I want it to be a side project so I thought it wouldn’t be bad to finish at least one part out of four now. The front with the colorwork will take its time anyway and now I can at least start with the sleeves already.

Then I sewed up the cardigan Michael’s mum had made him but never finished. I now know why my mum always told me “No, we don’t do cardigans with zippers in our family anymore.” I always wanted one and be pleaded to get one or make it myself if necessary. Now I know why I was never allowed. Sewing in a zipper is a pain. Plus, I’m not sure if it was me or the zipper was calculated to short, but it doesn’t go up to the collar. But it is ok that the collar now is zipperless as Michael proclaimed he would never close the cardigan up to there anyway. It is quite beautiful and it fits so everything is fine and I’m happy to have finished it. When I finished the cardigan I had some yarn left over and from the crochet blanket I had a few scraps already too. So I thought, why not do another pair of these about two hours baby booties and with this start a new pile of “charity or just in case” projects. I think they are so cute with all  those colours.

Next on the list I’m writing on my pattern for the Hunger Games Cowl or as it starts to be called, the Katniss Cowl. I’m actually nearly through. The only thing that still needs to be described is the cabled collar. I’m thinking of doing a quick video on how to do that tonight. Wish me luck with that as I have never done a video tutorial before. And then stay tuned as the pattern will be out soon.

And last but not least on the list of the to finish projects was the crochet blanket. I’m already doing the edge. Can you believe that? Months after I started it is getting colder again and I’m finally doing the edge… But the cool thing with this project is: I can already cuddle up in the blanket while crocheting (ok, I have to move it around me but still). I’m super exciting that I’m finally nearing the end because well then it is done, I can start something new and I can use it. 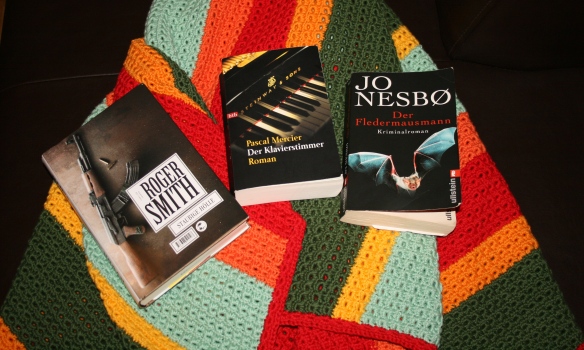 As for reading I didn’t read as much during our holiday in Mallorca as I thought, maybe because there were always three little girls around demanding attention. But I read more than usual: I read “Der Klavierstimmer” by Pascal Mercier a highly philosophical, lightly disturbing yet very good book about twins that write something like a diary to each other about a disturbing event in the past tiggered by a disturbing one in the present revealling a very weird family history. Recommendable but to be read with care. Next I read “Staubige Hölle” or “Dust Devils” as it is called in English bei Roger Smith. This really harsh and cruel book crapped my attention. I couldn’t stop reading it. If you are of the softer kind, don’t bother to read it. It is quite hard but I liked it. And now I’m reading the first Harry Hale crime story by Jo Nesbo call “Der Fledermausmann” or “The Bat” in English. This actually Norwegian crime sequel starts in Sydney which reminds me of my time there. It is actually quite good and I like the Harry Hole as a character: as usual for Scandinavian crime stories someone with a psychologial problem (ex-alcoholic) but somehow a funny one. I’m looking forward to reading the next one which I borrowed already from my brother too.

So, what are you knitting and reading?