I’m joining Ginny’s Yarn along today and you will not see any of the projects from last week. Not that I would have finished them all. But I shifted my focus a bit last week. 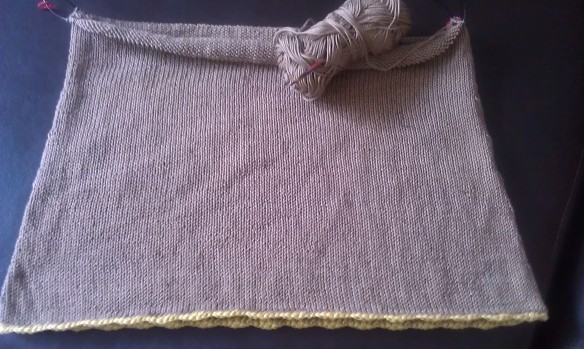 I stopped knitting on my popsicle dress for a while and decided instead to start with the summer top that I had been planning. I had already bought some nice summer cotton for it a while ago. And I’m already half way through in just a week. I even already added a small crochet edge. Now I have to knit for a little while longer and then the crochet part will start. I think it will look super cool. Especially as (it doesn’t show too well in the picture) the colours are super trendy. I mixed some muddy brown beige with a small acid green edge which in this context nearly looks neon. This neutral-neon mix that you can see in many shops now has grown on me.

Now to my nails. I wrote this part already but it seems to have disappeared again… Well, These are three new nailpolishes I got this week. I got a very cheap nailpolish from an essence limited edition called “guerilla gardening”. It is the lime green one and it is called “Plant the planet”. Though it could be a dupe to essie’s new summer collection nail polish “the more the merrier” that will be out in July here in Germany the nailpolish is a bit of a bitch. It needs several layers to look pretty. The dark teal is essie’s “Go overboard” and the dark blueish purple that I like even a bit better than the teal and that goes really well with the lime green, I think, is essies’s “No more film”. I got them both as a sample yesterday which is always nice. 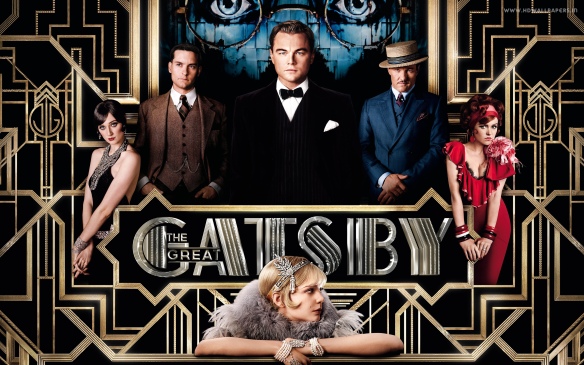 As to reading, I’m still sticking to what I had last week but I went to the cinema yesterday to watch “The Great Gatsby”. I had never read the book only knowing that it was something some people had to read in the English class in highschool. But I know and adore director and producer Baz Luhrmann (just think of Romeo + Juliet or Moulin Rouge). His movies are usually just a little over the top but so cool. And so was The Great Gatsby. The actors did a marvelous job (and I still prefer Leonardo di Caprio over Tobey Maguire. What very few people expected is that Leo would age perfectly good looking and he now really looks like a proper man and not just a boy) and the film is just so glittery and extravagant as you might imagine the roaring 20s to be. I think I should read the book too. And I thought I might go for some English Classic Literature (To be honest I have never read e.g. Jane Austen before, only watched some movies). Any recommendation what I shouldn’t miss?