On our “just girls holiday” in 2009, Tine, Eva and me went to a resort in Turkey near Izmir. While the stay itself was not too exciting (but very relaxing) one of our day trips was:

We went to the old Greek, later Roman town of Ephesus, Efes in Turkish.

It was actually quite expensive to go on a organised trip. Therefor we asked for a bus there and there was a minibus stopping straight in front of the hotel so we took the bus to get to Efes. This was very cheap and it turned out to be very easy too. The Bus driver was really nice and even though he hardly spoke any english at all he got were we wanted to go, showed us the way to Ephesus and bus stop back so we managed to catch a bus back as well. 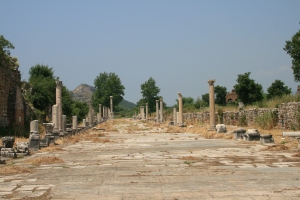 Now you can see lots and lots of ruins. There are public buildings like all the roads, the harbour, the great theater or the library, one of the signature buidlings in Ephesus. You can see it was a big city and it is kind of funny to see a harbour without a sea as due to land changes the sea now is about 10kms away.

Next to the representative buildings there are private ones. But for the best preserved ones you have to pay extra to see e.g. the mosaics.

But now to the downside. There are huge amounts of people in Ephesus. It seems to be a favourite destination for people doing a Mediterranean cruise. And well, then there is all those people from nearby hotels. It is just packed. But going the opposite way the groups were taking helped a little bit. Other than that it is said to go in the late afternoon, something we didn’t dared to do as we thought we might not get a bus back otherwise.

To sum it up Ephesus is worth a visit if you are in the region and want to do a half day trip and you can definitively do that tour without a guide.