Yesterday my cousin had his confirmation. For all of you who are not Protestant Christians: this is a specific event on which 14 year olds confirm the christian believe their parents “gave” them with their baptism. And with that they turn “of age” in a church sense, meaning they are now old enough to vote in church and receive the holy communion, but that just as a side note.

I went to Langsdorf, a little village in my home state of Hassia and we had lunch in the nearby little Town of Lich. After having eaten too much, to be honest, I went for a little walk, as Lich has a nice historical center.

While there have been finds dating back as far as 100,000 BC, what you can visit today is a historical city center with its timber frame houses dating back to the 17th century, the old defensive city walls with towers 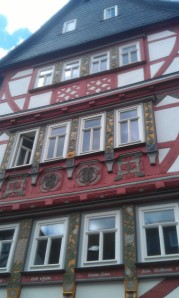 dating back to the 13th century and they have a palace as well. Here you can only visit the park but finding the entrance only when driving past on my way back home I was too lazy to look for a spot to park my car and walk through it too. The timber frame houses are amazing. Some are rather bend to some side, but they are all finely restored and magnificently painted and best of all, normal people still live in them. It is not just a museum part but a normal living quarter.

I walked through the center of the town of about 14,000 inhabitants and for a sunday afternoon found it quite busy, to be honest. This might  be connected to the fact that I usually think the smaller the town the lesser people can be on the streets. But well, it was a really nice spring sunday (even though still bloody cold 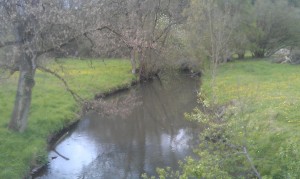 with only 10°C) and people seemed to feel the need to catch at least a little bit of sun in between rain that was coming too every now and then and see some fresh green.

By the way the weather: after a sunny week in March, the weather in April has been bad. It was cold and often rainy. We had sun, hail and a little bit of storms too. But we have a saying for that in German: “Der April, der macht halt was er will” meaning “April just does what he wants”. Do you have a similar saying? Well, anyway, it’s said that on the next weekend spring should finally show its nicer face with sun and warmth

and I’m really looking forward to it.

But coming back to yesterday: On my way back home to Düsseldorf I decided to stop again some kilometers outside of Lich too to visit an old monastry: Kloster Arnsburg. Here the ruins date back as far as the 12th century and you can visit a museum part which I didn’t because I felt a bit weird,lowering the age average by a significant amount (why is it that places like that in Germany usually only draw old people on a sunday afternoon walk but hardly ever young people?), and  I decided I would now rather start my way home which was another  two and a half hours drive.

It was real fun just stopping on the road. I should do that more often when driving through Germany, I think. I mean, I hardly ever go visiting things in Germany except for cities maybe, but there is actually quite a lot to see. Maybe on the next weekends I try to movitate some people or I’ll go on my own (with the warm weather Michael will be definitively gone all weekend long during the day working) and make some trips to the highlights of the Rhine region, surrounding Düsseldorf.